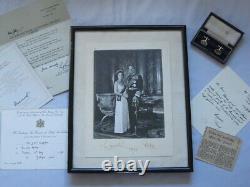 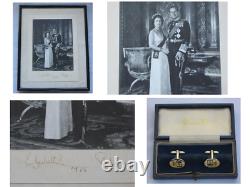 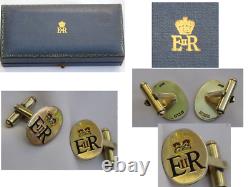 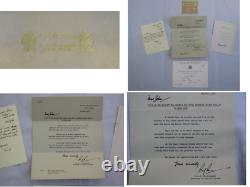 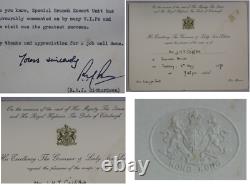 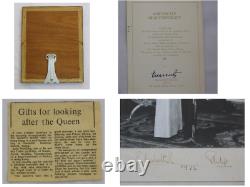 Finest English Silver & Collectable Antiquities. Preserving the past for the future. Item: A Very Rare Hand Signed Queen Elizabeth II and Prince Philip Grouping. A very Rare and Extremely collectable private collection of Royal Commemorative Ephemera presented to Mr John Griffiths Royal Protection Officer, Chief Superintendent of Hong Kong Police, which consists of a large framed photograph of Queen Elizabeth II and Prince Philip in full Royal Regalia, Queen Elizabeth has perhaps never looked more radiant, nor has Prince Philip appeared quite so handsome. Bold Hand signed in Ink by The Queen and Prince Philip to bottom and dated 1975, The grouping also consists of a pair of hallmarked sterling silver/Gold Gilt and enamel presentation cufflinks depicting Queen Elizabeth Crown and the Letters E ii R, they come in their original Royal Blue leatherette box with EIIR embossed in gold to top of box, inside there is a cream padding to the roof Gieves Old Bond Street London, who were appointed Jewellers to the Queen and Prince Philip, the base of the box is of royal blue velvet which the cufflinks sit. A letter from Special Branch Hong Kong dated 7th May 1975 thanking him for a job well done and commenting on the success of the visit, the letter is signed by R.

Richardson Director of Special Branch (Police) , there is also paper clipping that provides provenance of the autographed photograph being presented to John Griffiths along with his cufflinks, it also mentions an act of bravery previously, carried out by John Griffiths where he entered a bank where a man was holding 11 hostages at gunpoint. There is also an invitation addressed to Mr J H T Griffiths to attend farewell drinks held for Her Majesty The Queen and Prince Philip on 6th May which also includes dress code, there is a certification of authenticity for a bronze horse from The Spanish Riding School in Vienna which was also presented to Mr Griffiths but does not form part of this collection. The photograph has a wooden frame which has a couple of scuff marks here and there, the signed photograph would have come in a royal folder and framed during the late 70s by the owner, would benefit from being reframed. Mr John Griffiths was a Chief Superintendent of Hong Kong Police from 1962 onward and looked after the Royalty and provided Protection, I cannot emphasis how rare this collection is as private collections such as these very seldom come onto the market. Highly sought after Royal Regalia original Photograph and Original Hand Signed.

Size of signed photo in frame: 300mm wide x 375mm high. Condition: light surface marks consistent with age and genuine use, wooden frame has some cuff marks here and there, letters has folds, please see photos to judge for yourself. Maybe a gift for someone special, birthdays , christenings , all occasions, for your own collection maybe. The item "A Very Rare Hand Signed Queen Elizabeth II and Prince Philip Grouping" is in sale since Wednesday, May 26, 2021.

This item is in the category "Collectables\Historical Memorabilia\Royalty Collectables". The seller is "uksilverantiques" and is located in london, London. This item can be shipped worldwide.