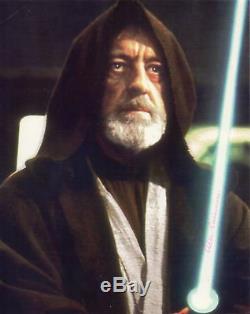 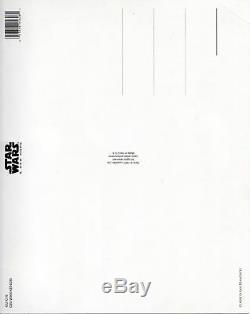 Alec Guinness - Star Wars - Signed 10x8 Photo - Hand Signed - AFTAL. Large 10x8 size Star Wars Postcard, signed on front in Pink Pen. Has some creases and bent corners, doesnt affect signature. This is rare to get a large Star Wars Picture Signed by Alec, i got various items signed by him when i wrote to his home a few times and still have a few of them left.

100% genuine, this has been in my collect ever since i recieved it from him! Sir Alec Guinness, CH, CBE (born Alec Guinness de Cuffe; 2 April 1914 5 August 2000) was an English actor. After an early career on the stage, Guinness was featured in several of the Ealing Comedies, including The Ladykillers and Kind Hearts and Coronets in which he played nine different characters. He is also known for his six collaborations with David Lean: Herbert Pocket in Great Expectations (1946), Fagin in Oliver Twist (1948), Col.

Nicholson in The Bridge on the River Kwai (1957, for which he won the Academy Award for Best Actor), Prince Faisal in Lawrence of Arabia (1962), General Yevgraf Zhivago in Doctor Zhivago (1965), and Professor Godbole in A Passage to India (1984). He is also known for his portrayal of Obi-Wan Kenobi in George Lucas's original Star Wars trilogy; for the original film, he was nominated for Best Supporting Actor at the 50th Academy Awards. Guinness was one of three British actors, along with Laurence Olivier and John Gielgud, who made the transition from Shakespearean theatre to blockbuster films immediately after World War II. Guinness served in the Royal Naval Reserve during the war and commanded a landing craft during the invasion of Sicily and Elba. During the war he was granted leave to appear in the stage play Flare Path about RAF Bomber Command.

Guinness won an Academy Award, a BAFTA, a Golden Globe and a Tony Award. In 1959, he was knighted by Elizabeth II for services to the arts. He received a star on the Hollywood Walk of Fame in 1960, the Academy Honorary Award for lifetime achievement in 1980 and the BAFTA Academy Fellowship Award in 1989.

Guinness appeared in nine films that featured in the BFI's 100 greatest British films of the 20th century, which included five of Lean's films. This is a genuine signature and not pre printed. Signature will be sent in a card backed envelope for protection. You can do a search for AFTAL and check me in the members directory. Includes Company COA - With Lifetime. The item "Alec Guinness Star Wars Signed 10x8 Photo Hand Signed AFTAL" is in sale since Wednesday, October 17, 2018. This item is in the category "Collectables\Autographs\Certified Original Autographs\Film". The seller is "jh-middlesex" and is located in Holmer Green. This item can be shipped to North, South, or Latin America, all countries in Europe, all countries in continental Asia, Australia.