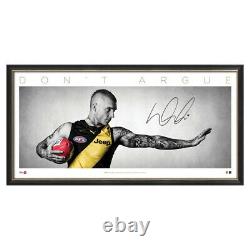 DUSTIN MARTIN'DONT ARGUE' SIGNED & FRAMED OFFICIAL AFL PRINT. Paying homage to Richmond superstar Dustin Martin, who became the first player in VFL/AFL history to win the Brownlow Medal, Norm Smith Medal, and Premiership Medal in a single season. Features Dustin Martin in his iconic fend-off pose, which has rapidly become one of the most intimidating and devastating maneuvers in the history of the game. Each lithograph comes personally signed by Martin, signed in black ink directly onto the stunning print.

The seller is "taylormadememorabilia" and is located in Melbourne, Victoria. This item can be shipped worldwide.