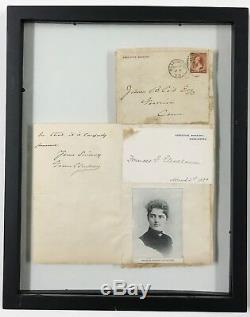 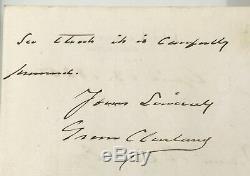 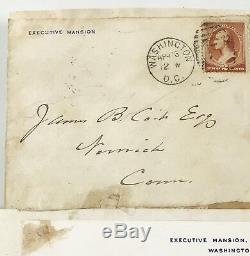 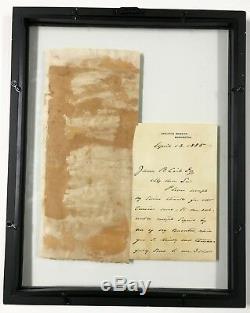 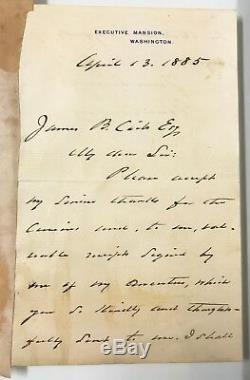 Hand Written Signed Autographed Letter by President Grover Cleveland. This listing is for a hand written letter by President Grover Cleveland to former Brigadier General James Bolles Coit. The letter is thanking him for a gift Coit gave to the president. It is written on letterhead from the Executive Mansion and is dated April 13, 1885. The back of the letter was laid down but can still fold open. Also attached is the original envelope and Coit added a photo of Frances Cleveland and what appears to be a signature. Comes in a new frame. Provenance: From the personal scrapbook of Brigadier General James Bolles Coit of Connecticut. James Bolles Coit was born September, 1836. He gained admittance to the bar at the age of 21. At the age of 24, on April 22, 1861, Coit enlisted as a private at Norwich, Connecticut. He initially mustered into the Connecticut 2nd Infantry but was commissioned into K Company of the CT 14th Infantry on August 20, 1862. He rose steadily through the ranks during the war, ending the war as a brevet Brigadier General.

He was wounded six times: Antietam, Gettysburg, Morton's Ford, the Wilderness, Deep Bottom Run, and Petersburg. His post-war career was equally interesting. He moved to Washington, D. Where he opened a successful law and patent office. He also served for a time as Division Chief, Bureau of Pensions.

He also helped to establish a national park at Gettysburg. Of course he was active in veteran events and reunions in both Washington and Connecticut. He was also the Assistant Adjutant General for the State of Connecticut.

He died in 1894 and is buried in Arlington National Cemetery. Many of the items we sell are well over 100 years old.

Inherently, these items will have some minor or light wear. Any major flaws and damages ie. Chips or cracks will be clearly disclosed in the item description.

The item "Hand Written Signed Autographed Letter by President Grover Cleveland" is in sale since Monday, February 18, 2019. This item is in the category "Collectibles\Autographs\Political\Presidential". The seller is "chamberlaindiscovery" and is located in Amherst, New Hampshire.