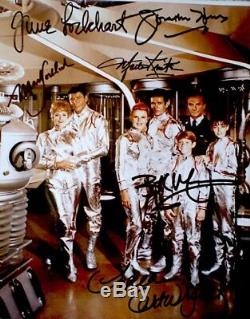 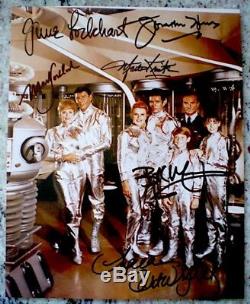 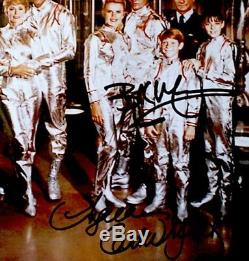 INCLUDES COA: All our signed photographs include the Certificate Of Authenticity from initial issuers. CELEBRITY INFORMATION #1: JUNE LOCKHART born June 25, 1925 is an American actress, primarily in 1950s and 1960s television, also with performances on stage and in film.

On two television series she played mother roles, Lassie and Lost in Space. Janet Craig on the CBS television sitcom Petticoat Junction 1968-70. She is a two-time Emmy Award nominee and a Tony Award winner.

CELEBRITY INFORMATION #2: JONATHAN HARRIS (Deceased) November 6, 1914 - November 3, 2002 was an American character actor whose career included more than 500 television and movie appearances, as well as voice overs. His best known role was as the villain Dr. Zachary Smith of the 1960s science fiction series Lost in Space.

CELEBRITY INFORMATION #3: MARK GODDARD born July 24, 1936 is an American actor who has starred in a number of television programs. He is best known for portraying Major Don West, the adversary of Dr. Zachary Smith in the CBS series Lost in Space. CELEBRITY INFORMATION #4: MARTA KRISTEN born February 26, 1945 is a Norwegian born American actress. Kristen is best known for her role as Judy Robinson, one of Professor John and Maureen Robinson's daughters, in the television series Lost in Space.

CELEBRITY INFORMATION #5: ANGELA CARTWRIGHT born September 9, 1952 is an English born American actress. Cartwright is best known as a child actress for her roles in the Academy Award winning film The Sound of Music, TVs Danny Thomas Show, and Penny Robinson, in the 1960s television series Lost in Space.

CELEBRITY INFORMATION #7: BOB MAY (Deceased) - ROBOT The Class B-9-M-3 General Utility Non-Theorizing Environmental Control Robot, known simply as Robot is a fictional character in the television series Lost in Space. N/S (no signature) CELEBRITY INFORMATION #8: GUY WILLIAMS (Deceased) January 14, 1924 - April 30, 1989 was an Italian American actor and former fashion model. He played swashbuckling action heroes in the 1950s and 1960s. Among his most notable achievements were two TV series: Zorro, in the title role and Lost in Space, as the father of the Robinson family. In the early 1970s Williams moved to Argentina where he continued to work in Argentina TV shows.

SPECIAL NOTE: Guy Williams rarely signed anything. Willliams left America in the early 1970s & retired in the early 1980s in Buenos Aires, where he died of a brain aneurysm in 1989. N/S (no signature) TV SHOW INFORMATION: LOST IN SPACE is an American science fiction television series created and produced by Irwin Allen. The show ran for three seasons, with 83 episodes airing between 1965 and 1968.

THANKS FOR LOOKING COME BACK SOON MORE AWESOME TREASURES ARE ADDED WEEKLY!! PACKING METHODS: All flat paper items are sent in poly sleeves with over sized backing boards. Fragile and larger items are bubble wrapped and sent in sturdy boxes with peanuts. We maintain high standards on every level. CONDITION: Grading conditions are subjective.

Be your own judge when deciding the condition of items vintage or new. We do have thousands of Positive Feedbacks and Return Customers. We try to provide clear information with known historical background on all our auctions. We sell VINTAGE AUTHENTIC ORIGINAL COLLECTIBLES that are intelligent investments and will continue to increase in value.

The item "Lost In Space Hand Signed Cast Photo Autograph x6 Members Color 8x10 COA Rare" is in sale since Friday, November 2, 2018. This item is in the category "Entertainment Memorabilia\Autographs-Original\Television". The seller is "thejackpot" and is located in Los Angeles.