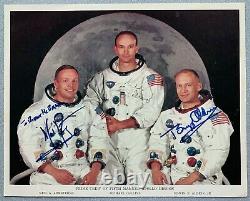 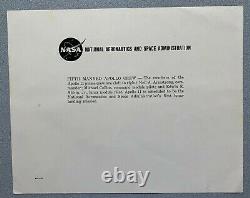 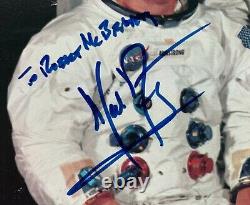 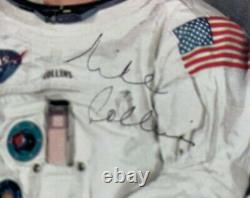 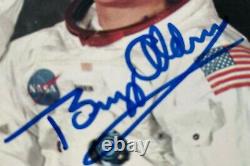 Neil Armstrong, Buzz Aldrin, and Michael Collins. Hand-Signed Official NASA Apollo 11 Mission Photograph. Neil Armstrong was the commander of the Apollo 11 mission and the first man to set foot on the Moon, Michael Collins served as the Command Module Pilot, and Buzz Aldrin was the Lunar Module Pilot and the second man to set foot on the Moon. The photograph measures approximately 8 inches x 10 inches and was hand-signed by the entire Apollo 11 crew: Armstrong, Collins, and Aldrin (Armstrong also inscribed it). The photograph is in very good condition with some minor wear and tear (mostly to several of the corners) and all three signatures look great (Armstrong and Aldrin signed in blue marker, which is vibrant color with minimal/if any fading, Collins signed with a black pen/thin marker).

The backside of the photograph features the NASA logo and some brief information about the fifth manned Apollo crew. Please see photos and do not hesitate to ask any questions you may have. The item "Neil Armstrong Buzz Aldrin Michael Collins Hand-Signed Apollo 11 NASA Photograph" is in sale since Tuesday, September 1, 2020. This item is in the category "Collectibles\Autographs\Space".

The seller is "boldventures" and is located in Shelton, Connecticut. This item can be shipped to United States, Philippines, Cayman islands.